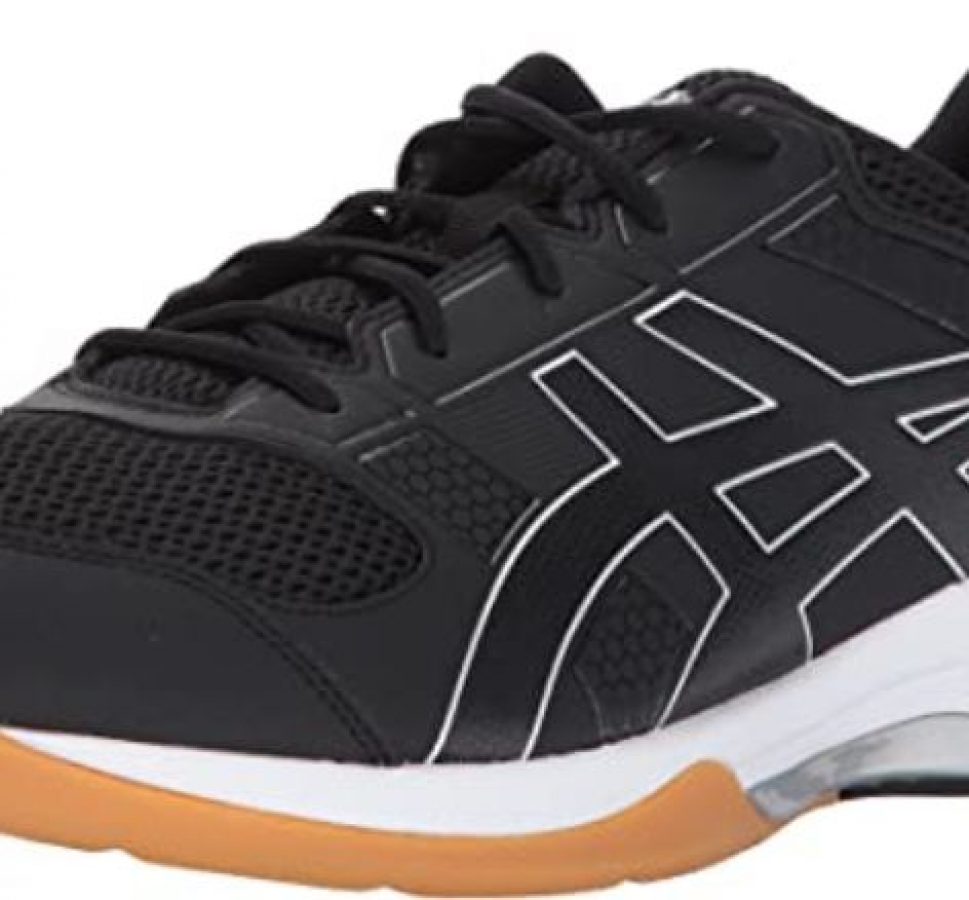 The outer half features a white combination of synthetic leather and mesh, with the ASICS distinctive swooshes (not to be confused with that distinctive swoosh) in black and subtle silver highlights, along with a silver hard plastic along the lower rear section. In contrast, the inner half incorporates a black base, and the swooshes are reversed out in white with silver accents. Thus the two halves are nearly mirror opposites of each other, except the inner half doesn’t have the same hard plastic at the lower rear section of the shoe that the outer half features.

Compared to so many of the other volleyball shoes I’ve recently tried out, these things made it feel like I was putting armor on my feet as I slipped them on. That likely comes off sounding more negative than I intend it to be. In reality, it’s a direct result of the outstanding cushioning these shoes possess that makes them slightly more rigid and thick. For many of you readers, this is the most important feature to you and makes the GEL-Rocket 8 the best pick for your game, even if the trade-off is a little more weight and bulk. It’s certainly not to the point however where it would be a deal-breaker for me, even though I typically focus on performance and responsiveness more so than the ultimate in comfort. Also on the plus side, the construction feels more durable than other alternatives which employ a greater amount of mesh.

My own experience with this pair of shoes corroborates what I’ve seen in other online reviews, which is that they appear to run a bit on the big side when it comes to sizing. I can feel my heel slide up a tick when I take steps. It’s also especially roomy in the toe section from the 2nd toe (is there such a thing as an index toe?) through pinkie toe; however, an indentation from the top at the big toe makes it a tight fit there and is slightly uncomfortable.

Despite the downside of the extra weight just mentioned, the upside is the GEL-Rocket has some really nice traction to help make up for it. There appears to be 3 different types of material involved on the underside of this shoe. One is the premium gum rubber I personally prefer  A second material is the hard styrofoamish material I’ve mentioned in other reviews, which, as best I can gather, is included because it provides a trade-off of less tacky material in exchange for reducing the overall weight of the shoe.

The third material seems to be a combination of sorts of these two types, as it’s a lighter synthetic component but with more stick-um than what I’ve been seeing elsewhere. My concern is whether this is simply an outer coating that was applied which quickly wears off, or is inherent to the substance itself and will remain for a long duration of time. If the latter, this is a type of traction I’d like to see in use a lot more often.

As of the date of this post, I haven’t seen any other online retailers who beat the price currently offered at Amazon, which ranges between $95-$120 depending on the size you choose.

4.8
Our Summary
The outer half features a white combination of synthetic leather and mesh, with the ASICS distinctive swooshes (not to be confused with that distinctive swoosh) in black and subtle silver highlights, along with a silver hard plastic along the lower rear section. In contrast, the inner half incorporates a black base, and the swooshes are reversed out in white with silver accents. Thus the

PreviousBest Volleyball Shoes For MenNextWhat’s a Libero in Volleyball?

5 Of the Cheapest Portable Volleyball Nets

4 Phases of a Volleyball Warmup